The Old Hut Has Left the Park

Hut 15 now finally demolished in Belmont Park.  The old timber clad temporary wartime barracks building was built in 1943 and was subsequently used in the years after the war by Exeter College as a classroom, there are residents of Newtown who remember being taught in it.  In 1988 it was adopted by Newtown Community Association as a community space used by local groups and for children parties.  It also provided the focus for many community events including regular Sunday afternoon social cafes, food festivals and as headquarters for the Respect Festival.  In 2014 it was decorated with the 50metre long commemorative bunting hand made by members of Newtown and the wider Exeter community to remember those members of Newtown who gave their lives in the 1st WW.  With the successful building of the new Newtown Community Centre to continue in the same tradition, the old building has had to be demolished but, excitingly, its days are not yet over!

The building has been sympathetically demolished so that it can be rebuilt in Silveridge Wood near Kingsbridge where it will provide a classroom and facilities for the Silveridge Wood Heritage Skills charity.  The charity aims to provide a ‘living museum’ that celebrates the traditional skills of craftsmen and women that have existed in the communities around the South Hams and offer opportunities for those who are interested to learn those skills too.  The absolute minimum has gone to waste, even the old storage heaters have been re-used by an arts project in Exeter, and bricks from the base reclaimed. 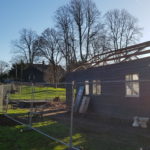 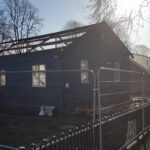 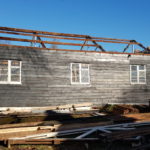 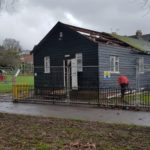 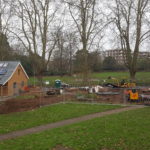 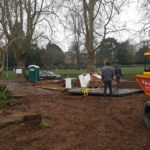 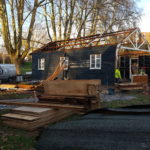 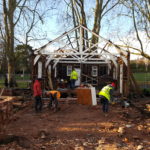 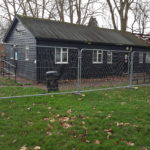 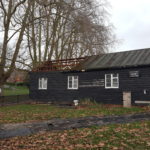 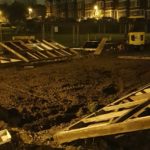 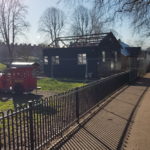 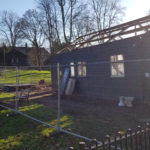 The objectives of the Association are to promote the benefit of the inhabitants of Newtown, Exeter. This is without distinction of sex, sexual orientation, nationality, age, disability, race or of political, religious or other opinions. We endeavour to do this in association with Newtown’s inhabitants, with the statutory authorities and with voluntary and other organisations. We seek to advance education and to provide facilities, in the interests of social welfare, recreation and leisure, with the object of improving the conditions of Newtown’s inhabitants.

We are a UK registered charity, number 1173331. Find us at www.charity-commission.gov.uk by entering our number in the “Search of Regular Charities” box.

Written and compiled by our Community Builder, Jayne Leaver, who is on Facebook @CBnewtownstleonards, the newsletter is issued every couple of months. If you would like to be added to the mailing list for future copies please drop Jayne a line at newtownstleonardscb@gmail.com.

There’s loads a good local information in there. Take a look!

Our project to build a new ‘Hut’ in Belmont Park.

We meet at 7:15pm most term-time Tuesdays in the Hut in Belmont Park.

Check out the latest bookings and events.